Santa Cruz Cyclocross: A Look Back

For racing cyclists, it's the final season of the year and that means cyclocross! Also called cross or CX, bicycle cyclocross racing originated in Europe as a way for road racers to stay fit throughout the off season.

Here's a little background and kind of a funny story about my cross exploits. Be sure to check my cyclocross page on my website for a lot more about old-school Santa Cruz cross.

The challenge for racers in the winter was keeping in shape with high-intensity workouts while staying warm. So the idea was conceived to race on slightly modified road bikes around a mostly grass or dirt track on about a one-mile circuit course. On cyclocross bikes, the frames have additional clearance plus knobby road tires and powerful cantilever brakes are used - soon disc brakes. When I raced, cross frames were mostly steel and the components were aluminum. Today, the bikes are aluminum or carbon and the components get lighter and lighter, including carbon wheelsets and components. Lightness is good because you have to carry your bike. 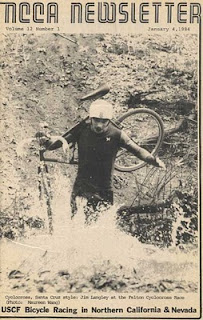 To slow the riders and ensure they won't freeze, the courses have obstacles and often mud stretches to force racers to dismount, shoulder their bicycles and run for a stretch. How well you can handle your bike on sketchy terrain and how seamlessly you can go from saddle to dirt and back again often determines how well you do in the races.

Fortunately, races only last for from roughly 45 minutes to an hour plus a lap, however, it's one of the most intense hours you've probably spent on two wheels and no one will tell you cyclocross racing is a cake walk. But, it sure is fun and a fantastic way to stay in shape all season long.

My involvement in cross started here in Santa Cruz in the early 1980's because we had a great cyclocross series here (and still do). In high school I was a fair cross-country runner and I had always loved cycling. I figured the combination of cycling and running would be perfect for me.

From 1982 to 1984 I made every race. I rode a custom Oxford cross bike (Jim Oxford was a framebuilder in Bonny Doon), based on the geometry of Tom Cuthbertson's Hetchins cross rig that he purchased in England in the 1970's. At that time Tom helped bring the sport of cyclocross to Santa Cruz. He's best known as the author of Anybody's Bike Book, the first massive best selling bicycle repair book. Tom worked at the Bicycle Center on Mission Street (now known as Sprockets), and went on to write great owner's manuals for Apple computer users. 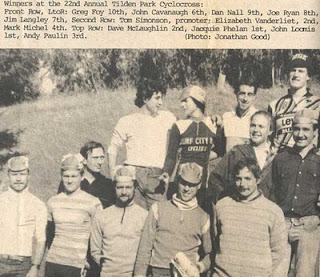 By the time of the 1984 NorCal District Championships and National Championships, which were held less than a mile from my house, on the University of California at Santa Cruz campus, I was competitive - not the highest level, but close. At the Districts, which were held in Tilden Park in Berkeley, the venue for the first National Championships back in 75, I finished 7th and ahead of two former national champs. But, the Nationals on my hometown course had a surprise in store for me.

Besides being part cyclist, part runner, the other thing that suited me about cyclocross was the mechanical aspect. Cross is really tough on bikes and if you're not keeping up with mechanical issues, you'll breakdown and have to switch bikes or wheels during the race, which can ruin your chances of a top finish. While I witnessed broken seatposts and handlebars, endless flat tires, crunched wheels and bent forks at the races, in my three seasons of cross I didn't have so much as a flat tire.

And, then came the Nationals, the biggest stage of my cycling life until then. Because I had finished top 10 in one of the toughest Districts races in the country, I was allowed to stand in the front row at the start. To my left was 5-time National Champ Laurence Malone. To my right was Roy Knickman, just a famous name to me.

I had raced with Laurence many times and even wrenched on his race bike. He was one of the first guys to give me racing, training and equipment advice. He told me to ride a harder gear than on the road so that I could take my weight off the saddle and float over the bumps. He taught me how to dismount to hit the ground in full stride. He helped me, sure, but, I never kept up with him in the races. And standing between him and Roy, I was so nervous and excited that I thought I would explode if they wouldn't hurry up and start the race.

The start was at the base of UCSC, at the top of Bay Street. If you've been there, you know there's a plush lawn to the right. We started there, turned right, blasted up the road and then veered left onto the grass track around the campus course.

The worse obstacle was a log pile seemingly going up into the sky that we had to run up each lap. But I knew the course well and was ready to fly up the opening hill and stick with Laurence and Roy for as long as I could.

In my dreams. They started us and I hit the gas as hard as I ever have and snapped my right pedal clean off! Unbelievable. I only had one choice: shoulder my broken bike and run a half lap to the pits to retrieve my back-up from my mechanic Scott Terriberry. Somehow, I managed to get there, leaped onto my second bike - an old junker 10-speed I'd modified - all my money in my now-crippled custom cross machine. It was at least rideable and I was able to start racing. It took Scott 3 laps to borrow a pedal off a spectator's bike to get me back on my Oxford. 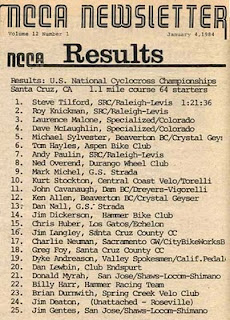 But I was far behind the leaders and in danger of being pulled. Every lap, I could hear the officials yanking riders just a little ways behind me and I battled to keep passing and moving up. My ugly start and the tough course helped me. As I got rolling, some of the guys in front started to tire and I moved further up in the field. In the end I finished 16th and only 25 guys finished the race. Steve Tilford won in dominating fashion lapping almost everyone in the race at least once. He's still racing and winning.

To keep the memories of those classic cross races back in the day alive, I've put a page about them up on my website with more photos and commentary. It was a different type of cross racing back then - more mud, more obstacles, lower-tech bicycles - but it was just as much fun as it is today. One of the biggest differences is that there are now cross racing series across the country and American riders are even successfully competing against the stars of cross in Europe. That's fantastic.

Have a great ride,
Jim
Posted by Jim Langley at 8:38 AM