Back To The Future

In part 1 of this great bicycle project, I reran a story I wrote for my Jim's Tech Talk column on RoadBikeRider called Basket Case, that told of my finding a quite beat-up 1974 Masi Gran Criterium, and deciding to go ahead and get it restored.

It was a tough decision because somewhere along the line it had been run into a parked car or curb buckling the top and down tubes. Plus, all the original paint and decals were gone, an awful spray-can finish had been applied and the parts had been removed and dumped in a milk crate to rust away.

Yet, the more I looked at the frame with the magical Masi M cutout in the bottom bracket, the lovely lugs that taper into the tubes, the clean dropout finish work and the extraordinary twin-plate fork crown, the more I felt I had to bring it back to its former glory.

I also had heard that that crown was sometimes a sign of a frame built by Masi founder and legendary framebuilder for the pros, Faliero Masi. This is part 2 of that story - which also appeared in my column in RoadBikeRider.


Masis were among the most respected racing bicycles ever built and even today roadies who raced them back then will tell you that nothing compares. But, it’s the pros who won on them that really made their reputation.

Just a few of the big names include, Eddy Merckx, Tom Simpson, Fausto Coppi, Felice Gimondi, and Jacques Anquetil (note that their Masis were painted to look like the team sponsor bike brand).

My model, the Gran Criterium was also the red rocket, character Dave Stoller rode in the best cycling movie of all time (ATMO), Breaking Away - adding more fame to the Masi name.

Masi worked out of perhaps the most amazing framebuilding workshop ever, which was and is still located in the Vigorelli velodrome in Milan, Italy. Today Faliero’s son Alberto continues the family tradition building frames there, though since the Masi name was sold, his frames now go by the brand Milano 3V. Masi aficionado’s Bob Hovey and Greg Fletcher have some nice virtual tours: http://bhovey.com/Masi/MasiVisit/  and http://masi.gregfletcher.net/masi/vigorelli/vigorelli.html .

Masi USA
Faliero must have been a visionary, too, because right as the huge bike boom of the seventies was about to hit America, he came here and opened a USA Masi division in Carlsbad, California. And, the fact that Masi was here in 1974 and not in Italy, meant that my frame might also have come out of that shop.

All these things and the desire to be able to own and ride such a famous marque (the frame is a 57cm - the perfect size), made me decide to send it off to an expert who could help me decide whether it was worth saving. 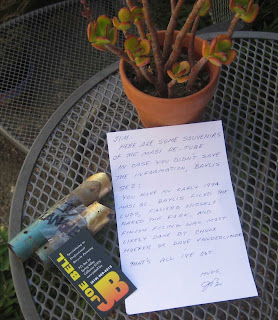 The Masi goes home
That would be Joe Bell of Joe Bell Bicycle Refinishing http://www.campyonly.com/joebell.html, because Joe has restored lots of Masis to perfection and his work is concors d’elegance level.

I called Joe first to see if he was interested in the project and he said that not only would he love to repaint the frame, but he would also show it to Brian Baylis, who was helping build Masi frames in those early days in Carlsbad, where mine was probably built.

That’s all I needed to hear and I boxed up the frameset and sent it off to Joe’s Southern California shop.

Only two days later Joe called to say he had already received and opened the box, inspected the frame and shown it to Brian.

I next expected to find out whether it was worth saving and how much it would cost. So, I was surprised when Joe told me that he and Brian had already decided the frame had to be saved and even more surprising, that Brian had already taken it back to his shop and started repairing the crash damage

See Joe's note and sections of the replaced down tube in the photo!

Great news
Joe went on to explain that in their estimation the frameset was built in early 1974 in Carlsbad and that Brian himself might have helped build it. Equally exciting was that Brian believes the fork was probably raked by Faliero Masi himself, who was training the other builders in his new shop at the time how to build his frames.

With this news, it was a complete no-brainer for me to send Joe a $1,000 deposit to commence the restoration (with frame repair, paint, chrome, decals, a Silca pump painted to match and Joe's super-careful packing and shipping, the total cost was $1,890).

[A quick aside: yes, I realize that I might have been able to find a rarer or better Masi for the same money. But it wasn't about the money or finding a better one. This Masi found me. I felt the same responsibility to rescue it that Joe and Brian did. There's tremendous satisfaction in resurrecting a survivor like this and that's what I was interested in, rather than trying to buy the ultimate Masi, which would be an entirely different thrill.]

I’ve included a few photos that show Joe and Brain’s fabulous work. I’ll finish the Masi restoration story when I get it fully built and back on the road - hopefully with some riding impressions.

I’ve already located 1973 Campagnolo Nuovo Record components and vintage road bike expert, Bob Freeman up at Elliott Bay Bicycles in Seattle, was kind enough to sell me a pair of the especially rare Martano rims, which were what it had when new.

Visit Bob’s site and scroll to see some of his impressive restoration work http://elliottbaybicycles.com/restoration/

In the front view photo you can see the twin-plate crown, which requires more skill to build with since it’s comprised of multiple parts. A standard crown is a single piece that the fork steerer tube and blades fit into. This twin-plate crown has a top and bottom plate and the blades and steerer pass through the bottom plate before the steerer passes through the top one and the blades fit inside the top plate.

There are also two reinforcing tangs on the inside of the blades that also extend through the twin plates (the yellow dots are decorative braze-quality check holes in these tangs).

Even if you've never built a frame, I think you can appreciate the challenge of getting that many pieces assembled, aligned and brazed together correctly. Especially since, on many of the best steel road bikes back then, which had the much more basic crown design, you would see misaligned crowns (very noticeable when you're riding and looking down). The Masi's is perfect.

One of the reasons I sent the frame to Joe Bell is because I've seen how he lays down an impossibly thin paint finish. It's extremely high quality, durable and lustrous yet what jumps out at anyone who loves handcrafted frames is how he keeps it so uniformly thin.

In fact, sometimes framebuilders choose to paint their frames with see-through clear coats to ensure you can see their brilliant craftsmanship. Joe gets this and gives you the best of both worlds: a stunning finish with all the originality of a new 1974 Masi but the ultimate coat that reveals the framesmith's exquisite detailing, too. 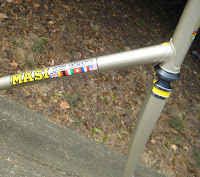 You don't want to just look at this bike, you're drawn in to inspect it closely and end up running your fingers along the joinery marveling at the artistry.

The frame is made of double-butted chromoly steel, probably Reynolds 531 because Masi had a falling out with Italian tubing make Columbus or so I’ve read. I've never actually ridden a Masi Gran Criterium in my frame size, but I'm going to savor every step of the build and not rush it.

Thanks to my friend and fellow Masi lover Chuck Schmidt of Velo-Retro filling me in, I've rounded up most of the correct parts to build mine close to original.

I'm in need of the right saddle, though, a Cinelli Unicanitor #3 would be good, I believe. If you have one you'd part with please let me know. Maybe I have something you need for one of your projects.

I'll close with a photo of the signature M cutout in the bottom bracket, neatly highlighted by Joe in yellow. When the Campagnolo BB is installed its translucent plastic sleeve should accentuate the cutout nicely. Masi sometimes used similar cutouts in the chainrings, also edged with yellow, and I've seen Masis where the ends of the top-tube cable clip bolts were highlighted with dots of yellow paint and other yellow details, too, to make the bicycle that much more special.

Thanks for reading!
Jim 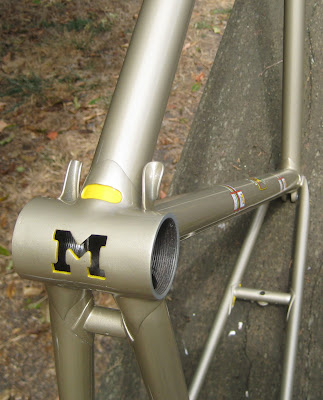