BIKE VIDEO: Racer's Eye Vid of the 2011 Tour of California

Good morning race fans,
In anticipation of the Amgen Tour of California's visit to Santa Cruz on Tuesday, May 14, I've been looking for good videos to share from last year's race and I found this one. It's among the best TOC movies I've seen because it was shot from within the peloton using a GoPro camera. These mini cams weigh little and mount almost anywhere.

I'm not usually a fan of the typical footage cyclists capture with these ingenious cameras, which is usually geared toward recording your own ride for enjoying it afterwards. But whoever was behind the GoPro in this TOC film knew how to keep it interesting.

Apart from the having to put out 300+ watts all week long just not to get dropped part, it almost makes this professional stage race look like something fun to try!

If you're viewing this in your email and not seeing the video, here it is.

Good rides!
Jim
Posted by Jim Langley at 8:05 AM 2 comments:

With all the rain we're having in the Bay Area, I thought I'd tell you about a wonderful new book that's helping me ignore that fact that the riding's miserable right now.

Based on his acclaimed Rides a Bike website, Steven Rea's new coffee-table treasure Hollywood Rides a Bike, Cycling with the Stars is +/- 160 pages of gorgeous, mostly black-and-white photos of the greats of Tinseltown pedaling, beside or around often beautiful vintage bicycles, which were regularly used as free, quiet and fun transportation around the expansive and almost always sunny Paramount, Warner Bros., RKO and Columbia studios.

I can't put this book down, mesmerized by the sensational professionally produced glossies of 190 Hollywood legends on bikes as cool as they are, and in such fascinating settings and poses. Plus, every picture is captioned with film critic and bicycle lover Rea's insightful remarks and trivia (I had no idea that "platinum bombshell" Jean Harlow died at only 26 or that horror star Vincent Price could ride a highwheeler - and no-handed!). Many also include the actual studio notes provided with the photos when they were released to the press way back when.

There's a tanned James Stewart taking a break during the filming of Hitchcock's Rear Window, riding double on a Phillips 3-speed with Grace Kelly sitting sideways on the top tube. There's Lauren Bacall made up to the nines, reclining against a parked bicycle and enjoying a cup of coffee. The studio notes (from January, 1945) read, "She's dynamic, is easily the most photogenic subject who has come to films in many a day. Lauren prefers slacks, sweaters and bicycles to dresses, silk stockings and open cars. She likes to be free and unencumbered, she says." And there on page 60 is a teenage Elizabeth Taylor riding along a sidewalk, as Rea writes, "her whole extraordinary career and all those marriages and tabloid headlines ahead of her."

Hollywood Rides a Bike is a celebration of classic Hollywood and bicycles and one of the most unique and satisfying books to come along in a while. If you like movies as much as I do, you'll love it.

Jim
Posted by Jim Langley at 8:50 AM No comments:

There are some local fundraising events coming up for the Tour of California's visit to Santa Cruz on May 14, so I'm spreading the word far and wide. Here's the line-up so far. I've also included one of the race posters. Be sure to click to zoom it. And if you missed it, be sure to watch the video about our stage.


CALENDAR OF EVENTS (lots of good food and cool prizes) 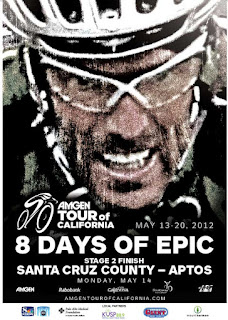 April 17 5pm - Auction and Dining at Shadowbrook (more good eats)
A percentage of the evening’s sales are donated to the Local Organizing Committee (SCCCC) when you mention “Amgen.” Don’t miss out on the Silent Auction in the Rock Room Bar!
A week in Hawaii, three days on Lake Tahoe, tandem paragliding flights, zip lining passes and much more! http://www.tourofcalifornia-santacruz.com/content/silent-auction-shadowbrook

Get involved and keep checking the website for updates as more activities will be added:
www.tourofcalifornia-santacruz.com


Thanks for supporting the race everyone!
Jim
Posted by Jim Langley at 1:07 PM No comments: