My Team Bicycle Trip/Symantec teammate and Capitola, California resident, Aaron Freitas (photo) was sailing down Old San Jose Road on Saturday, May 5 around 1:30 p.m. with his friend Buck Lyons, when Aaron was sideswiped by a car and knocked to the ground. Luckily he only suffered a concussion, six broken ribs, a collapsed lung, a broken collarbone, broken scapula and cuts and scrapes.

I talked with Aaron on Monday at the Santa Cruz stage of the Tour of California and he was in surprisingly good spirits - obviously beat-up bad, in a sling and bandages. But he was already talking about riding and racing again and determined to do something to bring the hit-and-runner to justice. He has put up $1,000 reward money for anyone providing information leading to a conviction. I wanted to pass this along and ask you to keep on the lookout when you're riding around here and especially in the Santa Cruz Mountains, and on and near Soquel-San Jose Road.

Other hit-and-runs
According to the Santa Cruz Sentinel, "Other recent collisions include one on Highway 1 that claimed the life of 35-year-old Joshua Laven, whose body was found on May 4, hours after he was struck while riding near Wilder Ranch. The CHP is looking for a 1999 to 2004 Dodge Ram pickup in that case. And in the past year, two bicyclists were killed in hit-and-run collisions on Empire Grade Road and Soquel-San Jose Road.

It would be great if we could catch these nutcases. Lyons, who also crashed trying to avoid riding over Freitas, saw the car that hit Aaron and described it as "an older model Audi wagon that was a "muted dull shade," perhaps grey or tan or off-white."

The Sentinel reports that "CHP officer Grant Boles said they are still working to find the driver, but have little to go on. He asked those with information on the case to call 662-0511."

If it happens to you
For what it's worth, I have twice "found" drivers who tried to knock me off my bike by swerving at me on the backroads of Santa Cruz. It was only by riding off the road and almost crashing that I avoided injury or worse. But I paid close attention so that I could recognize the car if I saw it again.

Then, to find these losers, I drove to the road where it happened on the same day of the week at about the same time as the incident. I parked, waited and watched. Both times, the vehicle that had tried to run me off the road came past and it was a simple matter to take their license number and file a full report to the police. In one case the driver was arrested and lost his license in court. Not enough of a penalty but at least it got him off the road for awhile.

Ride safe and always stay on the alert for insane drivers - I've run into them in every state I've lived in, and even when I was a long-distance runner - so it's not just cyclists who need to be careful. Sorry if this sounds bad, but it's true and it's better to be prepared and careful than to become a victim.

Jim
Posted by Jim Langley at 6:12 PM No comments:

Tour of California 2012 - An Amazing Race

Wow, what a day for cycling fans in Santa Cruz County. From dawn to dusk on Monday, May 14, it seemed like every road was packed with race fans setting up camp to view the action, and pedaling to spots from Bonny Doon to Felton to Soquel and Cabrillo College to cheer on the Amgen Tour of California tourmen as they pounded up and down our roads.

So that you can enjoy some of the local action, here's a video of the crash about halfway up the Bonny Doon climb and some photos I shot. Also check out Caletti Cycles' photos as they were at another scenic spot in the Santa Cruz Mountains.

With some of my Bicycle Trip/Symantec teammates, I rode up to the Bonny Doon - Ice Cream Grade intersection - getting heckeled the entire way by earlybirds already chalking the road and partying while waiting for the peloton. Once the pack passed our spot, we raced the race, shortcutting down Soquel Ave to take a straight shot to the finish line at Cabrillo.

All the way, we picked up other riders and had a fast and easy access to the finish thanks to the California Highway Patrol that had closed interesections, was stopping cars and waving cyclists through. So cool.

Enjoy the pics and let's all help bring the Tour of California back for 2013!

The crash took place right where we were standing so we had a great view of the resulting chaos. Video by Mark Boolootian (below in black). 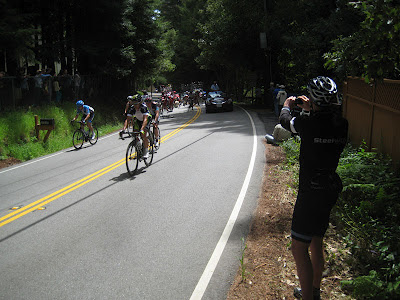 Posted by Jim Langley at 8:13 AM No comments: