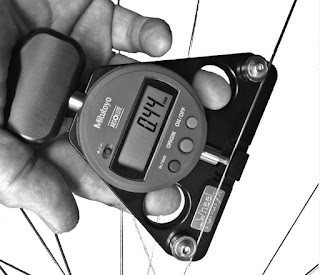 A few months back, in my RoadBikeRider.com Tech Talk column, about fixing wheels on which all the spokes loosened, I mentioned I would look at some of the new cutting edge tools today’s wheel builders and wheel companies are using to make better wheels than ever.

Wheel Fanatyk’s Mitutoyo Digital Tensiometer, that I review here, is one of these tools.

I needed an accurate spoke tensiometer because I’m now building carbon and aluminum wheels for a local components company (over 60 pairs to date). One of the requirements is hitting the tensions specified by the engineers designing each wheel model.

I’ve used a Wheelsmith Tensiometer since 1988. It’s a nice tool, but has never been recalibrated. And, I’m not sure how accurate its readings are any more. Note that Wheel Fanatyk recalibrates Wheelsmith tensiometers. 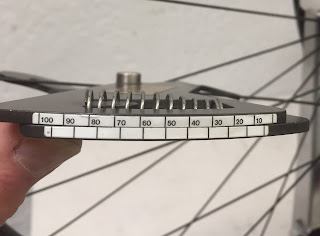 In the example shown, the two lines closest to lining up are almost at the 50 mark, which means the deflection of the spoke is somewhere past 45.

If you compare readings on both tools on the same spoke on a wheel (note that the photos above and below are on different wheels), you appreciate right away having an exact number to 1/100th of a mm, and not having to estimate spoke deflection by estimating where the lines align on a vernier gauge.

The right tension makes a good wheel
Nothing is more important for the integrity of bicycle wheels than spoke tension. Too loose or tight and wheels are unstable, or worse, they may fail. In an extreme example, a pair of classic Ghisallo wood-rim wheels I over-tensioned as a wood-rim newbie in the 80s - before owning a tensiometer - rode fine for a couple of weeks and then imploded when both rims broke to pieces.

It's not easy feeling for correct tension with your hands. Spokes can feel very tight and still not be anywhere near tight enough for a wheel to remain tight and true over the long haul. And since rear wheels and now front wheels with disc brakes are built with uneven spoke tension on the left and right, it's more important than ever to ensure the spokes are tight enough to make a great wheel.

To explain, if you have no way to measure the spoke tension accurately, you could be fooled into thinking the spokes are tight enough because the dished spokes feel tight when squeezed (the "dished" spokes are on the right side for rear wheels and on the left side for disc front wheels). However, if the dished spokes actually aren't tight enough, the non-dished side spokes will be too loose. And those are the ones that usually loosen when ridden causing the wheel to lose tension and go out of true on the road/trail.

Because Ric Hjertberg is a longtime friend, who owned Wheelsmith and now owns Wheel Fanatyk, I decided to look into his newer and superior tensiometer. Ric sent me the Mitutoyo Digital along with the optional Foot Pedal Data Output System to try out. Let’s look at the Tensiometer first.

A Jobst Brandt design
The Wheel Fanatyk Tensiometer was designed by the late Jobst Brandt, a bicycle God and engineer who worked for Porsche, Hewlett-Packard and Avocet during his career (Brandt was the genius who designed the first cyclometer that accurately measured cumulative elevation gain in the Avocet 50). Brandt also wrote the best book on wheelbuilding, The Bicycle Wheel.

What makes the Wheel Fanatyk Tensiometer so accurate is that Brandt’s design is barely affected by spoke thickness variance. Spokes vary due to material, how they’re manufactured, and plating and painting can affect them, too. Ric explained, “The Wheel Fanatyk is unique among commercial spoke tools because it does not measure across the spoke thickness, it only detects deflection.”

Brandt’s tool bends the spoke between three points with a constant low spring force. Bearings on either end of the tool minimize friction where they rest on the spoke. A Delrin (a hard nylon) “anvil” pushes the spoke against the gauge’s probe for tension readings. There’s a button on the gauge to zero it if needed before taking a reading on the next spoke.

Holding the tensiometer is impressive. It’s a weighty 311 grams (11 ounces) and obviously built of quality materials throughout (Ric hand assembles each one). There are laser-etched nameplates; one with the serial number. The jewel is the Mitutoyo gauge from one of leaders in measuring instruments since 1934. It sits protected inside the tool’s triangular profile and displays reading in 10mm tall numbers on the large LCD screen.

Once I got the technique down to gently rest the meter on spokes, it was simple and fast to go around wheels taking readings. You measure the right and left spokes from the same side of the wheel. There’s no need to switch the tool to the other hand or reverse the wheel.

While you can zero the reading for each spoke, most of the time the gauge reads zero once in position on the spoke. And, I realized that even if it starts with a reading, that number is so low that if you don’t want to zero the gauge before taking the reading, it’s not a significant discrepancy and easy to subtract in your head.

Watch this video of the Tensiometer in action.

Converting deflection to tension
Once you have a few readings there is one last step because the gauge shows the distance the spoke deflects in tenths of a mm. Wheel designers and engineers, however, specify tension with kgf (kilogram-force), so that’s the number needed to be sure wheels are tight enough.

In order to “translate” the deflection to a tension reading, you refer to a chart that comes with the Tensiometer (photo). By looking at the column showing the type of spoke on the wheel you’re measuring you can find the reading shown for the spoke and see on the chart what the kgf reading is. 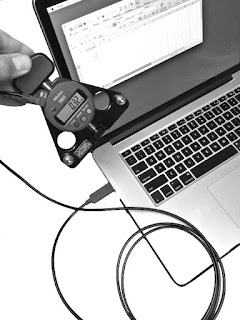 As you take each tension reading with the gauge, you step on the foot pedal and the tension number magically appears in the chart plus the cursor moves to the next cell. Once you’ve measured all the spokes on both sides you can view a wheel map showing the tension highs and lows around the rim. You can save and/or print the wheel’s specs to put with the finished wheel, too.

If you don’t have the Foot Pedal system, you can still enter reading by hand into the online utility. A screenshot of the SpokeService charts is above.

While most cyclists may never need a spoke tensiometer as accurate as Wheel Fanatyk’s, it does set the gold standard for wheelbuilders. If you’re a hobby wheelman or want to learn, this tool is the ultimate for getting tensions right. It’s also the best tool for checking new wheels you’re considering buying, which is why it’s used by major wheel makers. This helps ensure the highest quality builds, which is a great thing with all the new wheel components and new wheel specifications coming out all the time.

Price: $348 for Mitutoyo Digital Tensiometer. $98 for optional Foot Pedal Data Output System (There is also a Mitutoyo Dial Tensiometer: $280).
Posted by Jim Langley at 10:41 AM 2 comments: