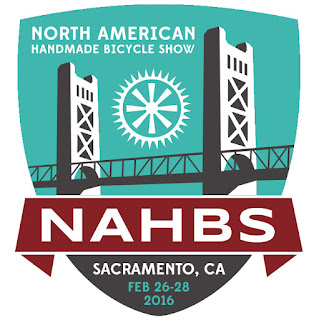 2016 NAHBS Report
With spring comes great riding and quite a few bicycle shows!

Last month I attended my second North American Handmade Bicycle Show (NAHBS), which took place February 26 through 28. It was the 12th edition, and attracted a whopping 179 exhibitors and 6,500 paid attendees (I paid $22) - the largest NAHBS yet.

The person we have to thank for coming up with the idea of NAHBS is founder, president and Kentucky framebuilder Don Walker of Don Walker Cycles https://www.facebook.com/DonWalkerCycles. 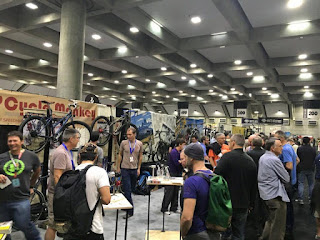 Don has created a fine thing in NAHBS, a unique show that changes locations every year, is open to the public and designed for makers of custom bicycles, products and the suppliers who support them to display their wares (like tubing and framebuilding tool makers).

Also unique is that you can even place orders and buy products from many of the vendors and I overheard some builders were happily taking full advantage. Keep in mind that many work in small - almost secret - shops and mostly make sales online or via the phone.

This year the show took place in California’s capital city, Sacramento at the Convention Center downtown. Along with its rich cycling history and famous bicycle club The Sacramento Wheelmen - of which I am an honorary member (don’t miss their Sierra Century April 16th!), Sacramento is where you can pick up the splendid 32-mile American River Bike Trail, also known as the Jedediah Smith Memorial Trail

The convention center was an intimate setting very different from crowded bigger shows you’ve probably been to. And it’s always exciting to walk into an entire hall full of bicycles, products and accessories most of which are almost impossible to find at the retailer level. That’s because so much of it is special order or custom built for consumers. And then there are the one-off eye-candy pieces made to win the best-of-show awards.

I was only able to attend the show on Saturday - nowhere near long enough to cover everything there. But, you can see lots of photos and read some excellent behind-the-scenes on the bike judging by my friend Patrick Brady over at Red Kite Prayer. He did a wonderful 4-part story with lots more to enjoy such as Mark Di Nucci's artistry (photo).

I hope you get to go to one of these NAHBS sometime. Maybe next year when it travels to the Salt Palace Convention Center in Salt Lake City, Utah on March 10-12. If you do get to the show, I want to share a secret with you. Don’t spend all your time gawking at the bikes and products. Instead find the bike builder whose booth it is and ask them to show you what’s cool. One of the awesome things about NAHBS is that the builder is usually in the booth and if you just ask, you can meet them and they’re delighted to talk to you. Here's some of what I learned doing that in Sacto.


My NAHBS 2016 started when I met BikeCad Bicycle Design Software’s guru, Brent Curry. He was standing in a booth with a little signage and a computer on a table - no shiny eye candy here to attract the crowds. Because I’m toying with the idea of framebuilding again, I recently stumbled upon BikeCad so I walked over and introduced myself.
BikeCad is free online software that lets you design bicycles and lots more. In order to fully design and use the plans to build your bicycle(s) from, you’ll need to pay for the Pro version, which is $500 Canadian. This gets you some amazing capabilities as Brent demonstrated on his PC. First he put in body measurements to create a giant cyclist almost 8 feet tall and 300 pounds. Then he mocked up a crazy-small bicycle putting in its measurements. Immediately the rider and bike were rendered on the screen with this behemoth squashing an itsy-bitsy wheeled bike.


“But wait, said Brent, watch this!” And he started making changes. Very quickly the giant started looking like he was on a custom fit bicycle. Next, Brent clicked the mouse a few more times and the bike became a mountain and then a triathlon bike showing what the fit was on those. He also showed how when you were happy with a frame design you can even print out templates for marking frame tubes for cutting perfect miters even with hand tools.

The more Brent showed me, the more applications I thought of for BikeCad. For example, anyone can use it to plug in their body and bicycle dimensions and see a perfect animated representation on the screen. Then, by experimenting, you can see right away how you’ll look with a longer or higher stem or a different seat height. Previously, the only way I knew to do that is through video analysis on a trainer and the time consuming process of changing parts/positions.

Since returning from the show and thinking about it more, to me BikeCad was my favorite product at NAHBS. And, while it might not be a bicycle, frame or component, it’s definitely a handmade product so if I was giving out the awards it would be top of the list.

Wheel Fanatyk’s amazing bike tools
After visiting with Brent, I hustled across the show to the Wheel Fanatyk booth. I’ve only seen photos of their beautiful wheelbuilding tools and I just had to lay my hands on them. Husband and wife team Ric and Donna Hjertberg were working the booth. You might know Ric from his years owning the celebrated Wheelsmith bicycle shop in Palo Alto, California, or from his spoke brand Wheelsmith.

As the supreme wheel and spoke guru, I knew Ric would be busy talking to 5 people at once, which he was. I gave him a wave and asked Donna if I could play with their toys and she was happy to let me. I most wanted to see how the handmade dial indicators on their P&K Lie truing stands function. P&K call them “clocks,” which should tell you how sophisticated they are (photo). 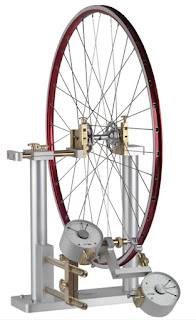 Unlike standard dial indicators that swing wildly and are difficult to read, P&K’s make it a complete no-brainer to see how far out the wheel is both laterally and radially. Which means that you can exactly see the effect of every turn of a nipple to quickly true wheels. And, if that’s not enough, the stands are designed and constructed so extraordinarily they’re works of art, too.

Donna also let me try out the $2,900 Morizumi Spoke Machine. It cuts and threads spokes, which solves the problem bike stores/mechanics have of keeping on hand the right length spoke for every possible wheel. Wheel Fanatyk offers other ingenious tools for wheel lovers and a lovely wood display stand by Ric’s brother and woodworker Jon.

Two trick bikes
Back on the show floor one of the busiest booths was English Cycles. By the number of people surrounding it, I was drawn to a bare-steel road bike on a pedestal. English Cycles is Rob English’s company but he wasn’t near the bike to talk to. The person who was there told me to pick it up, which I did.

To my amazement, the STEEL bicycle (silver fillet-brazed Reynolds 953 tubing) weighed just over 9 pounds. English has made a name for himself by thinking outside the box and also for proving that his bikes work by racing and winning on them. So, it’s likely if you’re up his way in Oregon you’ll see him on this stunner of a roadster (note that UCI rules have weight restrictions but not the races in Oregon Rob competes in).

With gravel bikes and road disc brakes all the rage, I next took a look at Calfee Designs’ Adventure model. It has received rave reviews and I like the concept of a 650B wheeled go-everywhere carbon bicycle.

The fat tires provide a super comfortable yet still fast ride and the carbon frame could care less about rain, snow and slop. Plus for overnighters or even credit-card touring with a small load, you’ve got the control, power and minimal maintenance of discs. 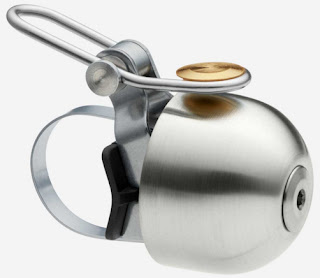 You may have already seen Spurcycle bells because even at $49, they have taken the noisemaker market by storm. At NAHBS they were actually assembling the bells to show how much handcraftsmanship goes into each one.

The thing that makes them unique is their tiny footprint, which leaves plenty of handlebar real estate for all your perhaps more important accessories. They also make the perfect ping to grab attention yet not startle. And, they’re built of brass and stainless steel and even guaranteed for life.

Here's another very interesting new bell by Knog, the "Oi."

Rocket7 handmade shoes
At $1,450, you may think you’d have to be crazy to order a pair, yet seeing the Rocket7 custom shoes in the flesh would probably convince you that it would sure be fun to try a pair - because it did me. After you make a mold of your feet following their instructions (or have them do it - they’re holding a clinic in Northern California in May), they build custom shoes for you.

They use the lightest materials such as their Ultralite Carbon, which they say can build a size 42 at 125 grams! And they can customize the fit and feel of the shoes many ways for perfection.

No wonder so many pros choose Rocket7s, including Tom Boonen and Greg Van Avermaet. There are also stock models starting at about $495. 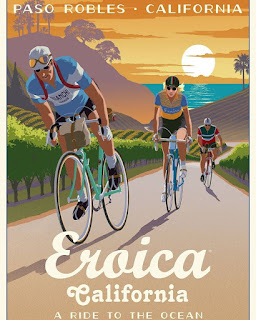 After NAHBS, the next big festival for those who love handmade things is Eroica California, taking place in Paso Robles April 8, 9 and 10. They had a nice booth at the show manned by Wesley Hatakeyama who runs the event and who brought a couple of his beautiful vintage rides and a display case full of super-rare goodies, like one of the first Campagnolo quick releases, circa early 1930s.

How rare? Enough that none other than Mr. Campagnolo himself, Valentino, walked over to meet Wes and see his rarities. Rumor has it that there’s now a possibility that Campagnolo might get involved in Eroica at some time in the future - a perfect match. There’s still time to register to ride Eroica, too. https://www.facebook.com/eroicacalifornia/ 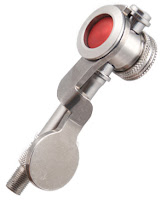 Other highlights for me in no particular order included, SRAM’s eTap wireless electric shifting, which was just as cool as at Interbike and which I will be reviewing soon (rumors at the show were that Shimano has one in the works but their booth staff denied it); Honjo’s prototype titanium fenders(!); Silca’s Hiro adapter (photo) for those hard-to-access valves; Abbey Tools’ carbon/ti pro-mechanic superlight hammer; and Caletti Cycles best-in-show-winning artist-painted matching bicycle, shoes and helmet ensemble.

To learn more about these products and to find out a lot more about the 2016 NAHBS hand-makers, I’ll leave you with this excellent reference that provides the names, websites and social media links for all the companies that were at the show http://www.2016.handmadebicycleshow.com/exhibitors/

You'll also enjoy these extensive interviews with the builders.

If you see me at Eroica, be sure to say hi. Look for me on a fire-engine red LEJEUNE.
Jim