Here's an early cycling Christmas "card" to wish you and yours very Happy Holidays! I find some of the details on this 1886/87 magazine cover fascinating.

I was surprised to see the abbreviation "Xmas" in the title and love the snow-capped, frozen font. Look at how the Os in Book have been turned into bicycle wheels. And, I think the red emblem in the center of the C in Cycledom is a chariot wheel, while the zeros that decorate the C likely represent mileage, since already cyclists took great pride in how far they rode each season and watch-quality striker-style cyclometers were popular.

Notice too that the fellow with the mustache is mounting his ordinary (also called a high bicycle, highwheel, penny farthing), which would have been the popular bicycle at the time. Below on that tranquil road is a tandem tricycle. Women riding highwheels was frowned upon so they often rode tricycles.

Then, depicting the future is a chap with what what I believe is a Rover, one of the "modern" designs that would lead to what we ride today. Finally, the winged wheel at the bottom is the icing on the cake. 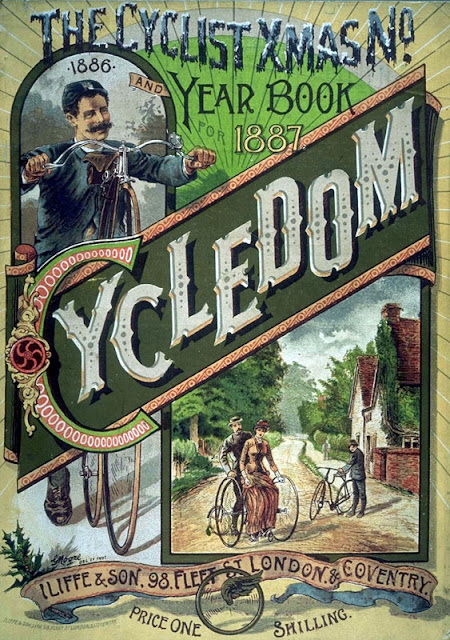