Ridley Scott's new hit movie, Robin Hood, starring Russell Crowe makes me think of other Robin Hoods - The Adventures of Robin Hood TV series and the brilliant 1938 Michael Curtiz movie of the same name with Errol Flynn as Robin, that all we kids watched in the sixties.

But, even more interesting, it makes me think of the "English racer" 3-speed Robin Hood bicycles made by Raleigh, that some of us were lucky enough to ride at the time.

On the left is a 1944 Robin Hood bicycle ad from my collection. Click to enlarge it so you can see Robin in his boots and cap, and shouldering his bow and quiver). You can also make out that the 1944 Robin Hood model was likely higher quality and built with different components than the later models imported to the USA that we rode. 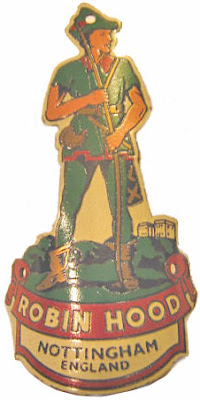 What's interesting to me, is that one 1960's 3-speed was pretty much identical to the next - sturdy all-British-steel construction, Sturmey-Archer 3-speed gearing, stamped-steel sidepull brakes, 26 x 1/38-inch wheels and tires, fenders and a chainguard.

But by naming theirs after the famous bowman from Sherwood Forest, and affixing a wonderful head badge of Robin in his Lincoln green suit with Nottingham Castle in the background, and using Robin Hood-theme decals, Raleigh captured every boy's attention (surely lots of men's too), and made them think that riding a Robin Hood was a lot more fun than pedaling around on a no-name two-wheeler. And, I'm sure other boys, like we did, pretended their bikes were horses and they were Robin's band of merry men.

If you get a good one in original condition, it'll be a nice rider perfect for getting around town or just becoming an outlaw and escaping reality for awhile.

That's a great example of powerful branding at work...from 'just another bike' to something special..something needed in today's cluttered marketplace, although maybe the Contadors and Cavendishs of the elite racing scene have a similar effect?

That's a beautiful bicycle Jorge. Thanks for the photo. Loved seeing it!

I just got a '70 for free. Its all original and works fine; I do need to know if the old cast carry rack over back tire is something original and I need a period correct seat for it.

Good find, George. Congrats. If the rack is aluminum, it's probably not original to the bike. Raleighs sometimes came with stamped steel racks painted the same color as the bike, so some Robin Hoods may have, too. For a seat, you could go with a used Brooks leather saddle. They're not too hard to find, or you could buy a new one: http://www.brooksengland.com/ Enjoy that bike!
Jim

Hey Jim,
I've been riding an old Robinhood to and from work and the brakes stopped working so got some brake cables. I found it odd they didn't fit to size so started doing some digging around and found out I have a 1959 Robinhood.

Do you know where I can find some bike specs for this bike?
I cut the front brake cable and lost a piece of it and now have no real idea how long its supposed to be.. I really love this bike and hope to restore it.

Sounds like a great bike, Olivia. It's a British 3-speed bicycle so it should take modern brake cables that you can buy almost anywhere that sells bike parts. It sounds like you might have lost a piece of the casing. That's the plastic part that the cable runs through. When you buy a brake cable set, you will probably get the inner cables (the metal parts) and the housing (plastic parts - lined with metal inside).

To install the new cables and housings, you cut the housings to size, which is something that the mechanic figures out when working on the bike. If you have the old housing sections you can copy their length. But if not, then you have to figure out the length yourself.

To do this you just hold them up to the brake lever (on the handlebar) and the brake caliper (on the frame) and you make an educated guess as to how long they should be. You want the housing to have enough length so it reaches and has a nice bend so that as the brake opens and closes the housing can move a little and not bind. If I guessed correctly and you are missing the front brake housing section, it's probably about 24 inches long.

Let me know if this answers your question. If you want to send me a photo of your bike, I'm happy to take a look and I can probably give your more specific help with your bike. My email is jim at jimlangley dot net. Have fun fixing up your Robin Hood!