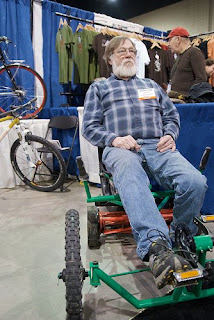 I couldn't attend the Shimano North American Handmade Bicycle Show this year because it was held across the country in Richmond, Virginia. But, I followed the online coverage and found a nice surprise on the cool cyclelicious site: photos of my brother Matt's pedal-powered recumbent tricycle lawn mower (I had only seen prototypes up until now - and heard from Matt that they worked great)!
So that I could share the news about Matt's clever invention, Cyclelicious was kind enough to let me use their story here. The nice pics are by photographer Ed Ip who covered the show for cyclelicious. Here's their story...
"Ted Wojcik of Ted Wojcik Custom Bicycles talked with us on the first day of the 2010 Shimano North American Handmade Bicycle Show about a unique trike he brought to the show.

Cyclelicious - You’re sitting on a pedal-powered lawn mower. Can you tell me about it?

Ted Wojcik - It was made for Matt Langley of Portsmouth, NH [editor's note: Matt actually lives in Eliot, Maine]. His brother is Jim Langley, the chief Technical Editor of Bicycling Magazine from 1989 to 1999.

Matt says he has the world’s greatest talent for blowing up gasoline-powered lawn mowers. Matt had been dragging this reel mower behind a mountain bike. The reel mower part of this is marketed and sold to be pulled behind a wheel chair. We forget that people in wheelchairs need to mow their lawn too.

Jim said to Matt, “hey there’s a guy up by you who makes bicycles, go see him and see what he can do.” My son Cody is a recent graduate from Worcester Polytech. He’s a Mechanical Engineer. It was interesting working with my son and seeing what $200,000 worth of education gets you.
He did the whole thing, with my input, in SolidWorks and it was functioning in animation in SolidWorks before we cut a piece of metal. So, this was a very contemporary design and engineering project that an old Yankee like me got drawn into. This is the result. I’m very proud of Cody. I was a little bit pessimistic, but we put it together at the shop and took it outside. It’s been mowing grass since August.

C - Do you think that the process you used on this pedal powered mower will influence how you design bikes in the future?

TW - I’ve actually been using a simple CAD program for making bikes since 1990. One of my customers gave me a very simple CAD program and I used it to document all of my bike designs and categorize them. One bike transitions to another which transitions to another. So the computer part of it I was very open to. But I’m an old dog and new tricks are hard. It was easier to have my son use SolidWorks; he’s very competent with the software. It was neat to witness it.

This is the first public showing. Although whenever we had it outside of the shop, cars pulled in off the street to see it. You can also take the mower off it if and ride it for fun, though that’s not really the intention. 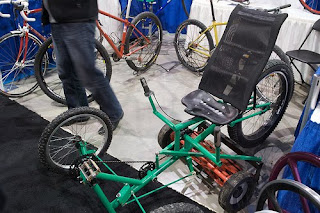 We’re getting reading to make the second version of it which will be a little different. We’re going to make it a little shorter so it turns tighter. It has a multi-speed rear hub with a coaster brake, but we’re going to put a fixed gear ini it so you can back up. It really doesn’t need brakes. If you stop pedaling, it stops. With fixed gear, you can hold it back with the pedals.

We’re going to go ahead and make some. We’ve had so much interest in it here at the North American Handmade Bicycle Show, we’re optimistic it will work out well for us.

This was very expensive to make. We’re shooting for between $3,500 and $5,000 for it. Hopefully it’ll work out. We paid $500 for the seat. By the time you add everything up, it was a lot of money to build this bike. Buying parts in quantity will help lower the cost.

We have some Wooster Polytech mechanical engineer students who are interested in interning. We’ll set up a production facility and try to make a couple of them a day. We’ll separate it from the bike business, but they’ll be associated. This will be a start up that we’ll go ahead with."
Posted by Jim Langley at 7:41 AM

I'd like to hear about your brother's special talent for blowing up lawn equipment sometime :-) Thanks for the Cyclelicious mention!

So far he's not telling any of his secrets ;-)

So glad you liked the interview with Ted Wojcik, Jim. I really enjoyed interviewing him, particularly his interest in "a bike for the people." Cheers!

The interview was great Heather. Thanks for letting me feature it on my blog. Ted is obviously a super talented bike builder with vision.

Great interview Jim. Thanks for sharing with us.

You're welcome! Note that they now have a Facebook page for what they have named the Zool Yard Tool here:
http://www.facebook.com/pages/The-Zool-Yard-Tool/118860138139297

Lawn mowing trike is a brilliant idea. I would like to try one of them.