Q: Saw your site online,
I have what looks like a an old Raleigh 3-speed, which my wife likes very much. I just bought a basket for her and while putting it on decided to see if I could fix her shifter. The bike was only shifting to 2 instead of 3 gears. I tried adjusting the cable, which broke, naturally. Now I'm trying to find anywhere where I can buy a new one. Any help with this will be immensely appreciated and I will forever be indebted to you.
Imploringly yours,
John

A: Hi John,
First, you should call local bike shops as this is a relatively common replacement part if they do a lot of repairs. If the bike shops don't have one, you might next try a few departments stores, which often have bike sections and sometimes even stock replacement 3-speed cables. If both those ideas don't pan out, you can order one online from http://www.bicycletoolsetc.com/
Just use their search box up top and search on the word "Sturmey" and the cables should come right up.

Also, you didn't tell me how the cable broke, but if it broke in the middle, you can usually tie it back together, or add a piece between the broken ends, as a workaround until you get the new cable. Most British 3-speeds have clips on the frame that you can move down to essentially create slack in the cable so you can tie broken ends together. But this trick won't work if it broke at the head inside the lever.

And, to adjust the cable properly, the best way to do it is to shift the bike into the easiest gear, which is first. The lever will be all the way down. In this position there should be very little play in the cable. Also, before you attach the cable, be sure the indicator rod (the piece screwed into the Sturmey-Archer hub; photo by Sheldon Brown) is screwed all the way in and then backed off slightly if needed to align correctly with the cable. 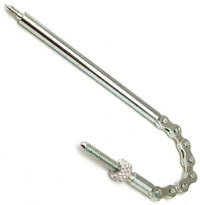 Also, it's a good idea to grease the cable where it runs inside housing and under or over pulleys. And, when the cable is adjusted correctly and the bike is shifting properly use 2 pairs of pliers to lock the cable adjustment by tightening the knurled lockring on the indicator against the end of the cable. That way you won't lose your adjustment over time.

Q: Several of my friends and myself with old-school 70's steel frames(Reynolds 531 DB, etc) are thinking about getting water-bottle fittings installed. The local shops want to drill a hole in our frame tubes (down- or bottom-tube) and insert a pop-rivet nut. That meets our need but we're all worried about putting holes in our old, thin-wall tubing.

A: Good question, Oran. If you look back at quality steel road bikes made before around 1970, you'll see that very few framebuilders ever installed braze-on water-bottle bosses on the frames. Instead they insisted that you put clamps on the tubes to hold your bottle cage on. This looked ugly, but the framebuilders said that if you drilled holes in the frame tubes it would cause them to break. (It's usually not a good idea to drill holes in structural frame members like bicycle tubes because the stresses of riding can gradually work on the edges of the hole and create shear points and over time you can have cracking or tube breaks that start at that hole, the weakest point in the tube.) It's important to understand that butted steel tubes are weakest in the center of the tubes, which is exactly where you drill the holes for the bottle braze-ons. Here, a quality steel frame tube could be less than .5mm thick.

Slowly the concern over the tubes breaking changed, though, and by the mid to late seventies most steel bikes came with bottle bosses brazed onto the frames, usually on the down tube only, but later on both the down and seat tubes, and then even later, also beneath the down tube on touring bikes (usually used to carry fuel for your stove). The reason this happened was because the braze-ons used and the installation of them addressed the issue of the holes weakening the thin-wall tubing.

The braze-ons were designed to reinforce the tube at the hole. Most were threaded inserts with a reinforcing rings or tabs that rested against the tube and when the braze-on was brass or silver soldered in place, it actually doubled, or more than doubled the thickness of the frame tubing at the hole making it plenty strong. This is the key reason they worked: they reinforced the tube and they were soldered in place.

That gives you some background. Rivet-type bottle bosses came along with aluminum bikes and they usually work fine on them, but I'm not sure I'd trust them on a nice old steel frame. I'm sure they would work for a while and maybe forever if you don't ride that far or all that hard. But, I'd worry that since they aren't actually brazed to the frame, that the holes in the frame could develop stress cracks over time, which could travel outward and into the tube. I've just seen too many broken steel frames from cracks like this, so I'd worry about it. If it was a heavy-duty steel frame it might work fine. But, a nice Reynolds double-butted frame has thin, thin tubing.

I'd recommend having a local framebuilder braze some bottle bosses on for you instead, or going low-tech and just using boring old bottle-cage clamps. The only drawback to having bottle braze-ons installed is needing to repaint the frame at the braze-ons. (Some people just touch it up with primer and don't worry about the looks - or, if you're good with painting, you might be able to match the original paint finish pretty closely and almost make the bottle braze-ons disappear.) But, you'd at least have a permanent high-quality job that you could rely on - and your frame wouldn't break.