Q&A: Saddle positioning when your seatpost won't cooperate, and a wheel from my past surfaces

Greetings from Santa Cruz, California where we just updated our always popular county Bikeways Map. Click the link to download and print a copy if you're headed here with your bikes, and you'll get around our busy beach town much more easily.

Here are some of the interesting bicycle technical questions that have come in since last we met, with my replies. 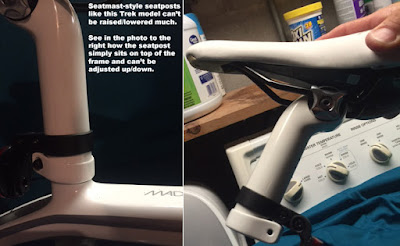 Q: "I just bought a Trek Madone 5.2 from a bike shop in California. I live in Florida. It was to replace my Madone 4.3 that got stolen last year. Long story short, without having the old bike to take measurement from for seat height, I figured them both being 47cm would make it the right size for me.

Well that was mostly true except the 5.2 has a seatmast not a seatpost that limits the height the seat can be lowered.

I need to drop the seat about 3cm to get comfortable in the saddle. I already have a low-profile seat with little room for lowering there without compromising comfort. I could do smaller cranks, I guess, but that would only drop me .5cm and that still leaves 2.5cm to go.

Trek said that I already have the shortest mast available. Any suggestions to get those last 2.5cm? Surely I can't be the first person to have this problem." 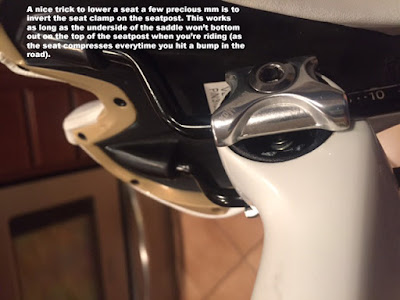 A: Thanks for sending the photos of your Trek and its seatmast showing the design, and your saddle and how it's attached (above).

You're right that there's no easy way to lower the seatmast and since this is the shortest one Trek offers, you can't replace it either (I suppose you could have a custom one made but it would probably cost a small fortune and end up not matching the finish of the bicycle, either).

Another option might be to modify the seatmast in some way, such as cutting out a section, but that would be a job for a carbon repair company, such as Calfee Design - and might cost a fair amount, too.

But, luckily, there's another way to lower your seat. It's an old 'trick' mechanics have used forever. It works on almost all types of saddles that fit on seatposts via a certain type of clamp. That type of clamp has to be capable of being mounted upside/down.

Not all clamps will do this, but many will, including yours, as your before and after photos, show. Thanks for sending the photos after following my advice, so I can share them!

The key thing to look out for if you're inverting your seatpost clamp to lower a seat, is to check that when a person's weight is fully on the saddle, that the seat doesn't compress so far that it bottoms out on the clamp or seatpost. This can happen in some cases and you never want to have your seat bottoming out when you hit bumps because coming down against a solid piece of metal like that could hurt or even injure you. The saddle is designed to suspend you from impacts for comfort and protection.

Note that one of the most common uses of inverting seatpost/saddle clamps is on children's bicycles. Sometimes a child is too big/tall for one size bicycle but when you look at the next size, it's a touch too large. If that's the case and you can make the too-large bike fit by inverting the seat clamp, they'll be able to ride the bike safely and grow into it, too.

Q: The following is an email back-and-forth between a roadie named Phil and myself. Phil started the thread with this question: "After three years on my wonderful Lynskey R230, I have finally decided the seat (Brooks B17) should be further back. I switched to a 25mm setback seatpost (I used to have a zero setback Lynskey seatpost) but I still want to push the saddle back a bit more.

At this point I’m sure you are saying, “Phil, you should have bought a Large instead of a M/L Lynskey frame.” Yes, probably -  but I did not, so here I am.

The problem, of course, is that the rails – like most rails – on my Brooks saddle narrow as they approach the saddle nose. The bracket (i.e., the platform which grips the rails) is wider than the rails (note – this is Lynskey seatpost does not use the Enve inserts).

Solution? Or out of luck?
Phil 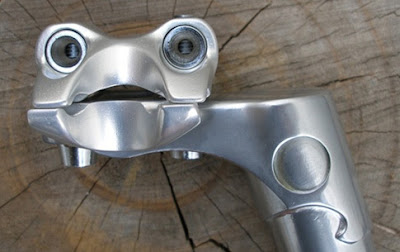 You also might need to shim the seatpost to get it to fit in your frame. Here are Cane Creek's seatpost shims, for example.

With a really quick search I found an example of a seatpost with more setback just to show you, the Nitto Lugged seatpost, which has a 40mm setback (photo).

Yes, this is a very old-school seatpost, but if it proved a huge improvement, you would at least know what setback works best for you and you could go in quest of a seatpost that provides it.

I haven’t done an exhaustive search for seatposts with extra setback, but there should be a few others out there with any luck. You might also ask Lynskey if they’d make you one with the setback you need – though I don’t know if they make custom components like that. Some framebuilders might.

Another option, though it means switching saddles, is trying to find a seat that’s longer or has longer rails or rails that allow putting the seat in the right position to provide the additional setback you require. So, for example, if you found a saddle that was an inch longer in the back, that might solve the problem, assuming you could sit on that seat of course. An example is Fizik's Arione.

Since bicycle shops that specialize in fitting people often run into this issue, they can be a good resource for the seatposts and saddles like this. However, it would need to be a large shop that carries a good inventory and fits lots of people. (The photo shows an SR "super-setback" seatpost that was around in the 1980s, and which you might find today on eBay.com.)

Hope this is helpful and you find a good solution.

To which, Phil answered, "Thanks.  Hate to get rid of my Brooks saddle but that may be the best solution. That Nitto seatpost looks really weird.

Wonder if there is a way to adapt the front half of the seatpost platform to the narrow portion of the rails on the Brooks saddle. Don’t want to go much further as I worry about the stability of the saddle."

And, I wrote back: "Yes, definitely weird. I have never seen an adapter like what you describe, however, I think one could be made with a little ingenuity. Today it’s much easier to design things like that with 3D printing.

If I was doing it, I’d look for a machinist that has the technology and likes to solve problems and has worked on bicycle components. Machinists will usually discuss projects for free so you know what you’re going to have to spend up front.

I would think, though, that it wouldn’t be too difficult or too expensive a part to design and make."

And, Phil then said, "Yes. Plus, although I have never looked at rails on saddles very closely, I just don’t recall seeing a saddle with “straight” rails – i.e., that don’t curve inward as they culminate in the nose of the saddle."

Summing up, I replied, There have been all kinds of bizarre saddle shapes and designs going back to the dawn of cycling, Phil. But, the traditional road saddle has the narrow nose and the rails that follow its shape.

There's at least one reasonably new saddles that has an I-beam running down the middle that requires a seatpost of the same design - both made by SDG (if you look closely at the photo, you'll see there are no rails, instead an I-beam runs down the center of the saddle). On these you can move it forward and back more, so it might be worth a look. 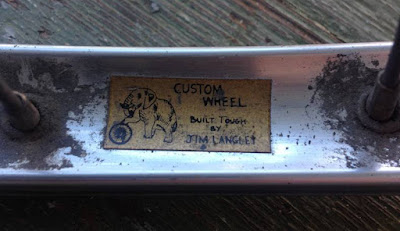 Q: I'm sure you get this all the time, Jim, but today while volunteering at the Bellows Falls, Vermont bike project I came across a wheel I'd been looking for, a Weinmann 129A 27-inch rear wheel.

Even better, it was equipped with a SunTour Pro Compe 6-speed 14-34 freewheel, which is about perfect. By itself this made me happy.

But after clearing off the years of grime I found this little sticker which made it even more exciting. Any idea when you were using these stickers as I doubt you would remember when/who it was built for?!

Thanks for your time,
Christopher C. Purvis

A: Thanks for making my day, Christopher! In 1978 I left the famous Andy’s Cycle Shop in Keene, New Hampshire and went to work for West Hill Shop, now in Putney, Vermont. At that time Neil Quinn the owner (retired now) had opened a second store in Brattleboro, Vermont.

I was managing that shop and working sometimes in Putney, too. Later, we closed the shop in Brattleboro to focus on our busier Putney location. I missed the wonderful cheese danishes I used to have every morning from the bakery next door to the Brattleboro store.

That’s my long way of saying that I probably built that wheel you found in one of those stores – and it would have been before 1982 when I left for California where I’ve been ever since. [Bonus: if you're hankering to build some wheels, click on the vintage Raleigh photo for my bicycle wheelbuilding step-by-step.]

Unfortunately, while I had the good idea to have stickers made for my wheels, I was not smart enough to record my wheelbuilds in a notebook, or use serial numbers, so I can’t tell you who I built those for. And, I’m still using the same stickers on my wheels because I bought way more than I should have when I ordered them from the printer back then. So I'm still using them on new wheels I build.

It’s very nice of you to send me the photo of that long lost wheel. I hope it’s still reasonably true and rideable! Just for laughs, here’s one of my favorite photos of back then. In case you don't recognize it, I'm in my Tour-yellow Richard Sachs T-shirt, back at West Hill in Putney building a wheel on the classic Var Atomic jig.

Be sure to also read my weekly column Jim's Tech Talk on RoadBikeRider.