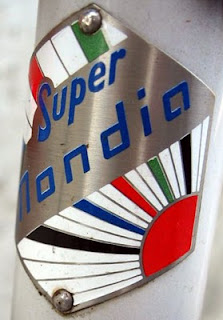 Q: Hello Jim
I am looking for a Mondia head badge circa 1980 to replace a lost one on my Mondia. do you know a source?

A: Sweet classic Swiss road bike John, and a cool head badge (photo courtesy of Classic Rendezvous). I would try checking eBay.com every week for it. Just search on "mondia bicycle badge" or even "bicycle head badges" or "bicycle emblems" or "bicycle badges." If you keep checking and checking you will see everything sooner or later.
You should also join the free www.classicrendezvous.com newsgroup and post a message to the gang that you're looking. If anyone has one on there they will let you know. They're a great group of vintage bike folks and they like to help others. In case you haven't seen it, CR has a nice page on Mondias too.

Q: Jim,
I have a new set of wheels for standard clincher tires. They have triple box construction style rims which cause the heads of the spoke nipples to be recessed, each down inside its own well. Not having used such rims before, I'm concerned to know if any special type of rim strip is necessary, as it seems that the pressurized tube could be at risk should it be stressed into each spoke recess.

A: Hi Roy,
You need a rim strip that fills the cavity in the rim. I’m not sure whether you have a narrow cavity or a wide one, but you’d use the wide one for wide cavities and the narrow one for narrow ones. Most rims today use wide strips, like the Velox 22mm-wide one that you should be able to find at most bike shops. Bring your rim in so you can test fit it and get the right width. If the shop carries a different brand that's okay as long as it fits.

Don’t worry about the tire pressure forcing the tube into the nipple holes. The strips are made of tough reinforced materials that will prevent this. You can tell if a rim strip is the wrong width for the rim because there will be clearance on each side. Then, if you install the tire and tube and ride with it, you might not have any issues for a while if you were sure to align the rim strip to cover the spoke nipple holes in the rim. But, a too-narrow rim strip will usually creep off center after awhile exposing the nipple hole(s) and when that happens, the sharp edge of the hole will usually puncture the tube.

Q: Jim,
I hope you won't mind a poorly phrased question from a biking novice. I'm buying a trike for my wife who has a balance disorder. It's a 3-speed foldable trike made by Worksman (from Walmart). We didn't want to invest at this point in a foldable recumbent trike, not knowing how my wife will like getting back into cycling, hence the more economical Worksman trike.

Since I'll be riding a normal bike with better gearing, I'm wondering if it might be possible at least to replace the internal 3-speed hub gearing with perhaps a 7-speed. Is this doable, and would it likely be expensive?

A: Hi Steven,
I’m not sure about the specs on that Worksman trike, but typically, upgrading to a 7-speed hub would be expensive. You’d have to purchase the hub and pay someone to build it into your wheel. This might or might not mean a new rim depending on how many spokes are in your wheel. The new hub has to match the original rim. You would also need to get the new shifter and cable and install and adjust that.

So, you could do it, but I would expect it would cost around $250 depending on which hub you ended up with, and you’d only end up with more gears, not necessarily any easier or harder gears. To figure that out you need to do the math but first you need to know the gearing ratios on the hub on your bike now and then research the ones on the 7-sp hub.

Usually, though, if you compare a 7-speed hub to a 3-sp, you get a slightly lower easy gear and slightly harder high gear, but not that much so. What you really get is more gears in between. So, what it gains you is more adjustability between gears.

Most people do fine whether they have a 3 or 7 speed. Keep in mind that any trike is heavy and harder to pedal than a standard two-wheeler so it’s not like she’ll be zooming around on it. Mostly it’s slow going, especially up hills. Even with a 3 speed, it’s usually possible to change the rear sprocket to a bigger one if you want lower gearing for easier climbing too.

The best thing is probably to have her ride the bike to find out how it is to pedal on the roads you guys normally ride on. If she needs easier gears you could visit a good local shop and ask them if they can switch out the rear sprocket for a bigger one, which should be relatively easy and inexpensive, maybe $30 or so. They may need to order the cog. You could also contact Worksman and ask about this as they are sure to have dealt with it before.

Q: Hi – There are plenty of voices online saying that cyclists should never use pressure washers to clean their bikes (due to the risk of forcing water into sealed units). I understand this.

I would always thoroughly re-lube the chain after cleaning it. Depending on the pressure of the steam cleaner I would be careful around the chainset and rear hub… I would also avoid paintwork, and wouldn’t leave it to linger on rubber.

If I’m very careful, and avoid any sealed units, am I risking anything else by using a steam cleaner?

PS – Surely this a great way to clean those bike components? Why aren’t there people doing this?

A: I haven’t tried steam cleaning, Richard, but what would concern me is too much heat. I would worry that steam would open small gaps and I would think that would allow the water to penetrate where you don’t want it, such as inside seals and between small parts meant to stay lubed. Since so many bike parts are like this, it would be nearly impossible to avoid them. You could certainly experiment to test that theory but I’d do it on something you don’t care that much about. I think you’ll find out that it’s easier to just wash the bike with a sponge and bucket of soapy water rather than do it with part steam cleaning and part with the soapy water and sponge.

Q: Hi Jim,
If you're building a traditional touring bike, is it better to have 135mm spacing for mtb drivetrains or 130mm spacing for road drivetrains? Also, is it possible you can use Shimano Ultegra shifters with Shimano Rapid Rise rear derailleurs?

A: Hi John,
You can pretty much make work whatever you want to. It’s just a matter of tweaking until it’s right and works the way you need it to. There are touring frames from custom builders with all kinds of different spacing and steel frames can be "cold set" (a fancy term for bending and aligning) to whatever spacing your wheel is. So, it’s really just up to you on how you want to build the bike to suit your needs. A 135mm rear end makes a lot of sense if you’re carrying a heavy load or riding on rough roads, but I rode 5,000 miles on 120mm spacing carrying 75 pounds over the rear wheel and only broke 1 spoke the entire way. So, it all depends on what you want to do, how good a rear wheel you have, the load you’re carrying and where, the roads, your body weight, your riding style, etc. Compatibility might be an issue too. If you ruin a wheel on the road and can’t find one to fit that might be a bad thing – unless you carry the parts to fix your own stuff. You want to consider things like that too in deciding.

I have not specifically tried STI with Rapid Rise to know if it will work, but I believe it will as I’ve seen plenty of STI bikes with XTR rear derailleurs working fine according to the riders. And Rapid Rise is just reverse action, otherwise it’s the same so you’d just have a different shifting action with each click of the lever. I think it will still shift fine. 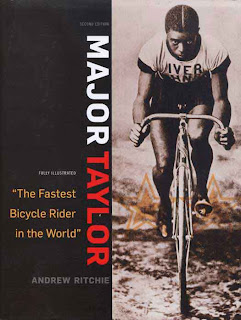 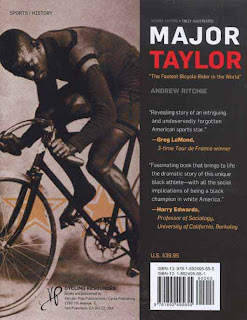 Posted by Jim Langley at 3:20 PM No comments:

My friend Peter pointed me to this video and he comments,
"There's a European Union initiative, Shared Space, to study making road users more aware of each other. Best article I've seen is this one, from a professor of civil engineering and transportation.

Seems every article mentions the Laweiplein intersection in the Dutch city of Drachten, de Kaden, where highway engineer, Hans Monderman, removed lights, crosswalks, curbs and most lane markings. He did install a big roundabout to control traffic. At another intersection, they did away with the roundabout. This video shows the traffic flow - said to be the "purest example" of Shared Space. Perhaps, we're finally getting back to 1906, in our most advanced traffic flow experiments."

Posted by Jim Langley at 6:48 AM No comments: