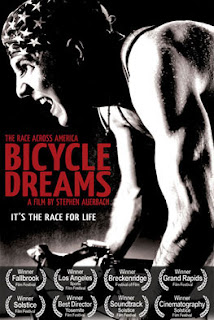 I first saw Bicycle Dreams, the best movie yet about the extraordinarily difficult Race Across America, last summer at former RAAM star Lon Haldeman's PacTour Wisconsin Camp, and was impressed.

So it was nice to hear from director Stephen Auerbach and learn that he had "modified the film since I saw it - in a big way," and I asked for a review copy of the $19.99 DVD, which has won multiple awards now.

After watching this re-edited version I can appreciate all the awards. The typical RAAM story as depicted on ABC Sports over the years and in magazines, is almost as tiring to watch as it is to actually ride the race. Bicycle Dreams has its share of suffering and misery - especially with the death of Ultracycling Hall of Famer Bob Breedlove during the race.

But, instead of despair or depression, what comes across watching this riveting story unfold are the inspiring qualities that drive people to remarkable lengths to achieve their goals. I was especially taken with sports psychologist and second-place finisher Chris MacDonald's insightful analysis of why athletes are drawn to impossible tests like RAAM and it made me appreciate the race in a new light.

Equally poignant is winner Jure Robic of Slovenia's route to becoming the top ultra-endurance athlete in the world. And, Catharina Berge's phenomenal effort as one of the few women that tackle RAAM.

Good cycling movies are hard to come by. Bicycle Dreams is as good as it gets, and it's about a lot more than cycling, which is what sets it apart. You can purchase it here. It'll make a great gift for any cyclist.
Posted by Jim Langley at 5:30 PM No comments:

The conference bike has been around for awhile but I think this video is new http://www.youtube.com/watch?v=4cDDBM9gJts